Sorry, I've Been Abducted by Aliens 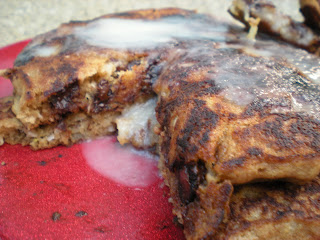 Here's a shot of the Magic Bar Cookie Pancakes from the long long ago!  NOTE: the Kroger Valu Brand Chocolate Chips are not vegan. Boooooo! They changed their formula a year or so ago and I'm pissed. Have no fear: Private Selection Organic Semi-Sweet Chips as well as 60% Cocoa Baking Chunks are vegan and have the obligatory blurb about being produced on shared equipment.

Sorry it has been so long since I've posted. I've seemed to have a ton of things going on in the past year that has thrown a monkey wrench in doing what I love...blogging! Well, I say no more to being overworked. I'm back, that's that, and I'll be doing my thing more often. Where was I?

I'd rather not talk about it. To squelch any blogging rumors, I am still very much vegan. I have not had a fall from vegan grace. Human grace perhaps, but I've dusted my butt off and am moving on. I appreciate any fan letters and thoughts of encouragement during my difficult time. My life needs a magic cookie bar pancake right about now, but I need to watch my sugar intake. I've had some medical issues arise where I now take a medication that automatically raises my blood sugar, so I'm actually having to rethink how I eat. Yay?

Included with my real life difficulties are technical ones. I just returned from an awesome trip up north to my old stompin' grounds of Kalamazoo. Guess what? Vegan pancakes and burgers to be found at the Studio Grill. Took pics and everything. Met the chef and he is gnawdorable and oh-so-kind. The staff are amazingballs.  It is my luck that the damned photos will not load, so I'm working with tech support on the problem. Fun, right?

So I'll save the high holy praises for that place once I can post the pics. Just know that if you live in the Kzoo area or are from D-Twat and looking for a great day trip, get to The Studio Grill on W. Michigan (near the corner of Michigan and Church St. downtown) and get yo'self some of that pancakey goodness. They are life changers. They have plenty of soymilk on hand for your coffee. 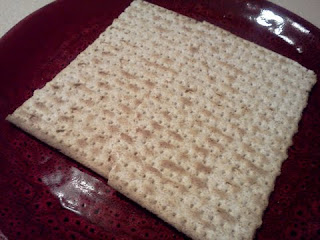 So what's a Jewish Vegan Gal supposed to do during Passover? For me, not anything incredibly different. Last year I had a "Tater Seder" which is a really cheap way to host a seder and keep everything K for P.

Since I quit going to temple and am now partying with the UU posse, I've reexamined my attitude towards the holiday. I won't get into those details because this is a food blog and I don't really want to digress from the primary purpose of eating well and havin' fun.

For those of you who are Pesach clueless, here's the story in a nutshell: Jews left Egypt to escape slavery and didn't have enough time to let their bread rise, so it apparently looked like a giant saltine cracker, only less tasty. Matzah meal was also fed to the Israelites because it was filling and cheap gruel to give to the slaves. So the eating of matzah has a couple of different meanings: urgency to escape oppression and what it means to be fed something sub standard.

I took this year's matzah and gave it a makeover. Readers, I give you... 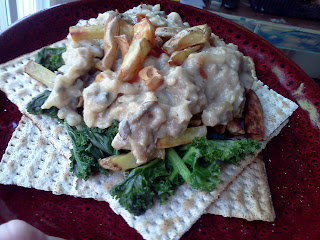 Jewish cooking isn't horribly complicated. Most of the time if you throw something on top of matzah or a bagel, that's good enough. Take two matzohs and overlap them into a Magen David shape. Got it? Good.
Top with steamed kale, vegan sausage gravy, home fries, and a little hot sauce. This is Hoosier fare meets Matzoh. Is it good? Well if you put enough stuff on matzah, sure. Gravy makes everything better, duh.

I'm not gonna tell you how to make gravy, because how you make yours is probably better than mine. All gravy is composed of some sort of liquid fat, protein source, salt, pepper, a little stock, and a few tablespoons of flour. Am I right or what?

Kale is different. You can steam it or cook the crap out of it, but it's much better if you do this with it:

Steam that kale, but don't let it get mushy. Drain and set aside in a larger pan. In the mean time, heat the oil in a small pan and add the bacon bitz, stirring until fragrant. You really want that oil to absorb the smoky imitation bacon flavor. Strain and add this grease to your kale. Use a few squirts of Bragg's and add a little hot sauce. Stir in the pot for just a few minutes. Viola.
Posted by Jen at 7:03 PM 1 comment:

I Scream, You Scream, We All Scream for Chocolate Moose! 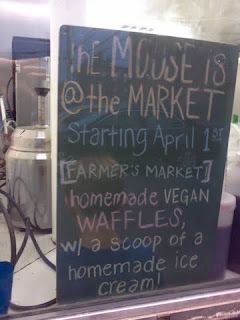 DUDE, it's fuckin' ICE CREAM. VEGAN. And looksie, they're gonna serve 'em up on WAFFLES at the Bloomington Farmer's Market. How cool is that? The destination is the Chocolate Moose. It has been around forever and they finally got with the program and started catering to us veg-heads. Uh and HUH. 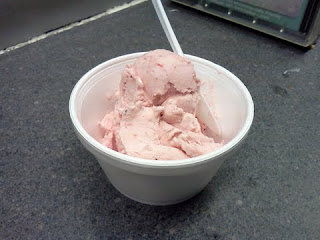 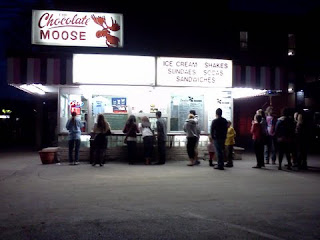 Not everyone in this line was waiting for the coveted vegan treat, but it sure is awesome that there's an option for vegan ice cream that's locally made. They sell it by the pint at Bloomingfoods too! Last but not least, they carry almond milk and vegan mix ins for a VEGAN BLIZZARD. Who says you have to eat dirt n' twigs? Not me. Otherwise, I'd have never made this choice.

It has been hard to blog lately because of my new work schedule. I spend more time at work than I do with my children, which is heart breaking but a wonderful reality of being a wage-slave American. Thank goodness there's stuff like this to make life a little more sweet.

Another thing that makes life super-dee-duper awesome is all my bloggin' has started a small cult following. I had the pleasure of meeting Gena from Choosing Raw, at and she asked me to write a guest article for her. Vida Vegan Con .You can read it here!
Posted by Jen at 7:56 PM 1 comment:

Who is That Pain in the Ass Vegan?

Jen
I put the word heal in health food. I wield a magical spoon decorated with glitter and puffy hearts. Believe me when I say that it is possible to be cured with cookies and casseroles.