what is this diablo dog you speak of?

yeah, yeah. something they don't talk about in the book of genesis was on the 8th day how the great and almighty you-know-who got a really good idea for a vegan hot dog. we all know that real hot dogs are made of a bunch of icks and gags, but vegan hot dogs are heavenly. well, there's a way to make them even larger than life--by making them completely evil. good-evil, that is.

kids i'm gonna be vegangelical and do some preachin'. lemme tell you the good news about the diablo dog. (insert southern baptist narration here) the diablo dog won't take you away from what's good. the diablo dog is a miiiiiiighty force, that puts the plain ol' chili dog to shame. can i get an a-men? amen! and what clillin's are coney dogs? a hot dog with sloppy joe meat? oh, no--oh laws of mercy we can't have that. we need to cleanse our souls with a comfort food so mighty that it brings us closer to the divine.

you don't write about no diablog dog from summer camp, oh no laws of mercy. you wear a teeshirt with I ATE A DIABLO DOG silk screened in ALL CAPS to show the world that you been sanctified by the power of a vegan hot dog masterpiece. you always drink a cold beverage with the diablo dog because it is SPICY, and you don't need no dessert after you eat one chillin's, no you don't. what you need is some prayer and a few antacids.

oh okay, i can't do the preacher dialogue. back to jewish jen. anyway, a diablo dog is a vegan hot dog on a grilled bun served with vegan chili, vegan cheez sauce, horseradish, chopped jalapenos, onions, pickle relish, hot sauce, and don't go stingy on the fakin' bacon bitz. i got the idea from an episode of strangers with candy where jerri blank is getting a diablo dog and says, "don't go stingy on the bacon bits." you never really got to see what was on it, but i had a vision to go and make one. i was not vegan back then, so the real diablo dog was the stuff of the nitrate gods and heart attack angels. i wondered could it be made vegan? of course it could.

you can't slap a bunch of shit on a bun and call it a diablo dog. you need to follow these directions to invoke the almighty lord of the vegan hot dog heaven AND underworld to get just the right flavor. look at the pictures: 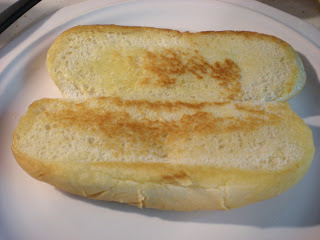 1) grill a hoagie bun-(because they are larger) with earth balance or your fave vegan margarine. the kroger brand hoagie buns are vegan. 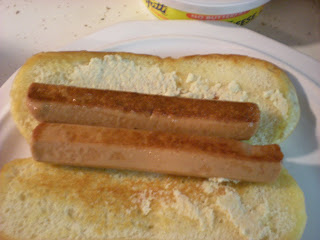 2) take your vegan hot dog-(2 OF THEM because the bun is bigger and this is the diablo dog we're talkin' about) of choice and grill it or pan fry it. don't ruin the magic of the diablo dog by boiling or nuking it. you will ruin the sacred nature of this special treat. i used yve's brand vegan dogs. lightly spread some horseradish on the toasted bun. don't use too much because you want the other flavors to shine through. the horseradish is but an accent, y'all. 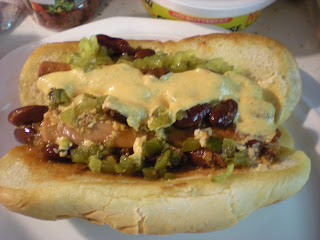 okay, then you put on your favorite vegan chili. usually, my spouse makes this from scratch, but we were lazy and used a store brand. bad idea. this made the diablo dog slightly sub-par from others i've had. i had to doctor it with some chipotle ms. dash. anyway, put on some chili, vegan cheez sauce of choice-(*i have a recipe at the end of this entry), chopped jalapenos on one side, and dill relish on the other side. 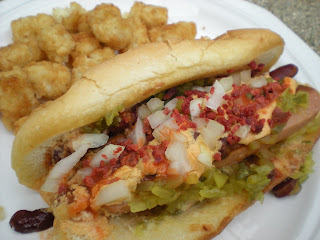 NOW top it with some chopped onions, hot sauce of choice, and fakin' bacon bitz. DON'T be stingy with these. 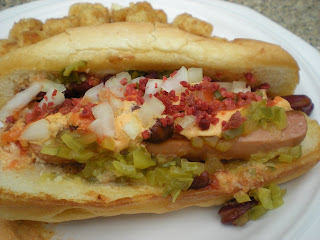 this dog goes well with an ice cold beverage-(red cream soda in my case), tater tots, chips, or french fries. the diablo dog is a messy mistress and you'll need something to wipe yo face and scoop up the excess that falls on the plate. i prefer potato chips or corn chips with my dog.

the heartburn can be kind of intense after one of these, and you'll more than likely say to yourself, i'll never eat this again. when you go to sleep at night, the most amazing thing will happen. you will dream of this vegan dog. you will have another one the next day. after you've exhausted a pack of vegan pups, you'll wanna stay away from them for a while. six months later, you'll look at your loved one and say, "man, i could go for a diablo dog right about now." and it'll be on like donkey kong.

in a saucepan under med. heat, soften cream cheese. add taco sauce, then nooch, then mustard, then frank's. whisk. it'll look (and taste) like cheez whiz, i swear to the vegan cheez gods. remember, i'm not that great with measurements, so you might have to start with smaller amounts of the taco sauce, nooch, and frank's--and keep adding until you get that just right taste.

Holy fucking crap, dude. You have just made my world a brighter place. Seriously, I'm tempted to go make this right now — except I'm fresh out of veggie dogs, Tofutti cream cheeze, hoagies, and chili. But come grocery day, this will be mine. Oh yes, it will be mine (and yes, I just quoted Wayne's World...).

How do you think this would fare with nacho cheeze sauce? I just remembered I've got an unopened tube of Teese Nacho in my fridge. I love you!

This I must try

Holy Hot Dog! This is what I am talking about. Now this is a "HOT DOG". I am going to try this monster.

My omni man grunted and scratched when he saw the pictures...this we gotta try! lol

Who is That Pain in the Ass Vegan?

Jen
I put the word heal in health food. I wield a magical spoon decorated with glitter and puffy hearts. Believe me when I say that it is possible to be cured with cookies and casseroles.